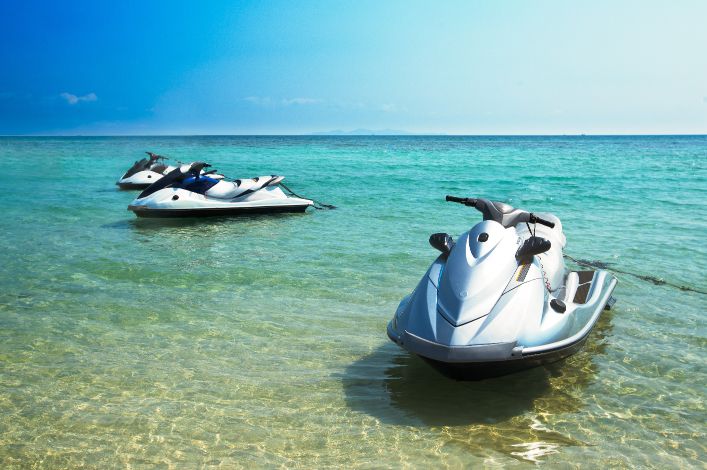 For countless Australians, Summer presents the perfect opportunity to get out of the house, head to the water and cool down with a dip in the ocean, a float in the harbour or a swim in one of the nation's many winding rivers. Whilst the majority of us are happy enough with splashing about in the waves - a large number of Australians do enjoy spending time on the water, in a wide range of varying watercraft.

With this in mind, and with Summer upon us - Holman Webb is taking the time to remind our readers of the importance of insuring their watercraft, regardless of shape or size.

Whilst a typical home and contents policy may cover you for accidents caused by your dog, your bicycle or even your python (if you have one) - what it won't cover is injury or property damage arising out of the use of a vessel.

Many people purchase insurance to protect their motorboat or yacht, with this generally covering the boat's own dinghy - but it's easy to forget to insure smaller toys such as Jet Skis (PWCs) or kayaks. The consequences of an accident can be very serious, and even if the court finds that you weren't at fault, you may be forced to incur high legal costs.

It is for this reason that boat insurance is essential for all watercraft, no matter how small.

As in any maritime situation, liability can arise from a range of circumstances including a 'man overboard' situation, a collision, a capsize or a fire. It is similarly possible to be held liable for causing excessive boat wake, which damages another vessel or dock.
It is important to note that with respect to PWCs and other small vessels, there are some additional hazards for which you can be liable, including:

In Whittington v Smeaton [2016] ACTSC 76 (see Holman Webb's 2017 article discussing this matter), the Plaintiff was acting as observer on a Jet Ski operated by the Second Defendant, which was towing the First Defendant who was water-skiing. The First Defendant fell. As the jet-ski turned to pick him up, the Plaintiff fell into the water and his leg became entangled in the towrope, with his foot being traumatically amputated.

The Defendants pleaded an immunity from liability under Section 19 of the Civil Liability Act 2003 (Qld) which protects a defendant from harm suffered as a result of the materialisation of an "obvious risk" of a "dangerous recreational activity".

The Plaintiff was a novice. He hadn't planned on riding a Jet Ski, and was in fact wearing street clothes at the time of the incident. The Defendants (who were brothers) were experienced. They advised the Plaintiff on how to act as an observer, as well as how to handle the tow rope. They then operated the vessel without any incident for some time. The brothers then swapped places. After the second fall, the Jet Ski turned more quickly. The Plaintiff reached out to secure the tow rope and fell off, at which point his foot got caught in the tow rope and was amputated.

Both parties had a marine expert, both of whom agreed that the last turn was too quick, and that the instructions regarding the tow rope had been inadequate.

The court accepted that both Defendants had been negligent. In addition, the court found that in the circumstances, it was not a "dangerous recreational activity".

In making the determination, the court noted that it is necessary to take into account the particular circumstances surrounding the parties' participation in the recreational activity. This may include any limitations on participation by the Plaintiff which might reduce the risks involved (see Fallas v Mourlas [2006] NSWCA 32). Both experts agreed that there had not been a significant risk of physical harm in circumstances where the vessel was being used to tow a water-skier on an inland waterway - everyone involved was sober and the weather conditions were fine.

On that basis it was deemed not to have been a "dangerous recreational activity". The situation might have been different had the operator been 'freestyling' or 'wave jumping'.

Ahmed Elskaf v Khaled Ghalayini [2019] NSWDC 86 is another interesting case worth highlighting. Two PWCs collided on the Georges River, causing one rider to fracture his back, hip and ribs. At that geographical point in the river, Jet Skis had tended to ride in an anticlockwise loop, staying to the right of the river.

The Plaintiff said he had stopped to take a drink of water when the Defendant's Jet Ski hit him at high speed from the right rear. The Defendant told a different story, claiming that he was proceeding normally when the Plaintiff suddenly emerged from the left (across the channel), and that he had been unable to avoid the collision.

The court found the Plaintiff's version to be unreliable. His witnesses gave evidence in confliction with their earlier police statements, with exaggerated accounts of the Defendant's reckless riding and "zig-zagging" before the accident. The Plaintiff had previously mislead Centrelink and the Australian Taxation Office.

More importantly, Police had examined the Plaintiffs' Jet Ski after the accident, and a reading was taken by accessing the Yamaha Diagnostic System which was part of his engine. The Defendant's vessel, being older, did not have such a facility.

The Technical Coordinator for Yamaha provided a report stating that the Plaintiff's engine speed in the 6 seconds prior to the engine shut off switch (kill switch) being activated was 7,650 revs per minute, which was "very close to the throttle being fully open". Moreover, the Jet Ski had been in use for at least 78 seconds before it stopped - thus it could not have been idling, as the Plaintiff had alleged.

On that basis, since the Plaintiff has the onus of proof, his case failed.
Ironically, if the Plaintiff had been more straightforward in his claim, it might well have succeeded (with a significant reduction for contributory negligence). The police who investigated the accident recorded that:

"Police also believe that both riders had time to take evasive action to avoid a collision. Both had reported that they had time period (sic) they were thinking about the actions of the other rider which in police opinion would indicate that there would have been some time for one or both riders to take\attempt to take some form of evasive action."

The International Regulations for Preventing Collisions at Sea 1972 (COLREGs) which apply (with amendments) to Australian waterways require all vessels to maintain a proper look-out and take action to avoid a collision. Accordingly, a finding of fault on both sides is very common in such cases.

If you have a query relating to any of the information in this piece, or you would like to speak with somebody in Holman Webb's Insurance team about the necessary nature of boat insurance, please don't hesitate to get in touch today.